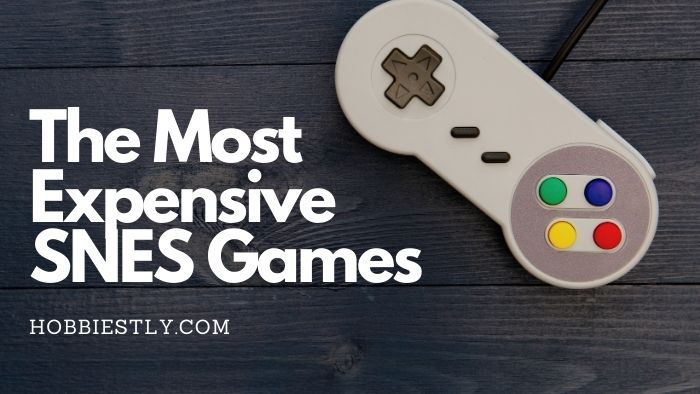 People’s willingness to pay a high price for a game tends to increase if there aren’t many copies available.

That’s what happens to many SNES games.

As one of the most popular Nintendo consoles, SNES games are put on a high pedestal by game lovers.

Even today, when the system is past its prime, games’ demand is still there.

Luckily, the SNES Classic Edition was released just a couple of years ago with games you probably played a lot growing up.

Donkey Kong Country, Super Metroid, and Super Mario world are some of the well-known titles.

Others are billed as the most expensive SNES games of all time.

How can a game even be slapped with a hefty price tag?

Supply and demand are clearly at play here.

Rare products are more likely to come at high prices because they are not easy to come by.

Besides, retro games have been creeping back into public consciousness in recent years, which leads to an increase in demand for these classics.

If many people want a product that’s considered rare given the limited quantity, then it’s easy to understand why the price would skyrocket.

In case you’re curious to know the SNES games that belong to this category, here’s the list.

With an estimated price of $23,000, Nintendo Powerfest 1994 is easily among the most expensive SNES games ever.

Anyone who can score the highest points will come out on top.

When the competition was fierce due to the influx of consoles and games, Nintendo returned with a particular cartridge that included some of its best titles.

33 copies were distributed to stores across the country, and many suggested that they had gotten completely destroyed after the follow-up tournament.

It turned out that some of those copies managed to escape the eradication.

Rumor has it that there are 2 that still exist, both are in the hands of wealthy investors.

Under this circumstance, it makes sense that this cartridge has such a high value.

And the last copy was sold on eBay for the price mentioned above.

But looking at how rare this game is, it’s entirely justified.

This special cartridge was put out by Nintendo for a competition.

There was another released in 1991 for the system. NCC 1992 specifically was released one year later.

The competition brought together players to test their gaming skills for titles like F-Zero, Pilotwings, and Super Mario World.

As with other special cartridges meant for tournaments, this was also supposed to be destroyed in the end, but several copies somehow ended up being saved.

There are around 3 in the existence of this game.

And only a year later, there’s another discovered in an attic of someone who worked for the company at some point.

Donkey Kong is one of the franchises that define Nintendo. Therefore, it’s not surprising that the demand for the series still exists to this day.

Even if you consider yourself a fan, this particular cartridge had likely slipped under your radar.

As the title suggests, this cartridge’s production coincided with the Blockbuster Video Game Championship II, which took place at stores worldwide. Besides Nintendo, another one was also created for the Sega Genesis.

It’s comprised of 8 levels, and players were only allowed to go on for 5 minutes.

As one had finished playing within the specified time frame, the score would be revealed.

And top scorers from each store were awarded prizes.

The gameplay does sound slightly different from the Regular Donkey Kong, but this was for a competition, after all.

By the way, for those wondering about the price of this cartridge, it’s estimated at around $1,425.

Both of these games have reasonable prices when sold separately.

Put together in a pack, the price would increase significantly.

It was unknown if this pack had physical copies sold in stores or not. It’s actually primarily meant for the Lifefitness bike unit.

Many of the copies available for sale on the internet were discovered in the warehouse of Nintendo of America.

This led to them being difficult to find and also drove up the prices.

How did it come close to this price range in the first place?

We can’t deny that scarcity plays a part, but the games also serve quality.

For those unaware, Mountain Bike Rally is a bike game that adopts a realistic play style.

Meanwhile, Speed Racer is a racing game that takes a leaf out of an F-Zero X’s book.

It’s no brainer to think that Earthbound is a stunning game, but the exceptional quality that comes with it doesn’t automatically put this game on another level price-wise.

It’s still comparable to other SNES titles. What really sets it from others is the Big Box version.

It’s loaded with a full players guide, not to mention that it also includes cards that can give you a deep insight into the Ness’ world.

That said, it’s still considered tricky to play by many.

And to start with, it’s important to note that this game doesn’t play like the average RPG.

The story was set in suburbia. Throughout the game, you’ll come across a myriad of enemies.

And to get rid of them, you’re not going to use swords, and all of these items often present in RPG games.

Instead, the tools you use to defeat them are household goods.

Despite the difference, Earthbound is widely acknowledged as one of the greatest ever graced by the RGP scene.

And the unique gameplay adds a lot to the fun.

This game ain’t touching the first mention in this review, but conversely, it can’t be considered cheap at all.

$400 isn’t exactly something you’d call cheap for a retro game.

Is it too much? Not really, the price is still reasonable due to the rarity.

As with many games on this list, this one also became a part of a tournament.

It was allegedly created only 2,000 copies. Copies have appeared on some auction sites, which probably affected its value from time to time.

Another copy was sold on the same site for a slightly higher price, $285.

However, with the revival of the retro era, it seems that the game will continue to pick up steam, so some can be priced much higher than before.

Just like many classics from the retro era, Hagane: The Final Conflict has also become increasingly valuable with age.

A couple of years back, copies were for sale for as low as $50, but now the price has grown multiple times.

Stories made the rounds that this game was a Blockbuster exclusive. Still, according to some sources, many copies were available at different stores, which kind of refuted the assumption that it’s too rare.

Needless to say, the talk turned out to have a good impact on the game’s popularity.

In fact, it has become a treasure in which retro game collectors try to get their hands on.

The truth doesn’t really matter at this point. The fact that the copies are in circulation for high prices tells that it takes effort to acquire them.

Started out as an arcade game, Aero Fighters finally made its way onto the SNES thanks to the warm reception.

It was originally released in 1992 and ported onto the home console in 1993.

The gameplay is similar to that of other vertical-scrolling space shooters, but it distances itself from others with an engaging storytelling.

That’s not to say that other games in this genre don’t offer that, but this game will leave an unforgettable impression with its excellent storyline.

Players are allowed to select one of many characters. Each one represents a nation.

If you manage to overcome the obstacles, you’ll be greeted with a scene specially-made for it.

This is interesting, to say the least, especially for a game released around the time.

How much is an Aero Fighters cartridge?

One can cost around $650, probably more if it’s in perfect condition.

A genuine collector will always have a reason to get their hands on rare stuff, even if they don’t personally relate to it.

Are you a fan of Rendering Ranger R2?

Whether you’re a fan or not, it’s an undisputed fact that this is a great game.

And due to the scarcity, the price has soared to the 4-digit territory. You can probably get one for $500, but don’t be surprised if it hits the thousand mark.

For the record, Rendering Ranger R2 is a game that centers around a space superhero.

There are in-game elements that set it apart from other space shooters.

The objective is to save the world from an alien invasion.

The player can choose from 3 to 7 lives, but since continues are out of the equation, practice is pretty much the feasible way to beat the game.

1. What Super Nintendo games are worth money?

Super Nintendo games are good quality, so even those outside the rare gems are worth it.

Now, if you’re a collector, rare items like the ones mentioned in this review are definitely value for money because there aren’t many copies left in circulation.

Some have even increased by over tenfold from their original prices.

2. How much is the original Super Nintendo worth?

The average price of an original Super Nintendo is around $75 on eBay, but it also depends on the console’s condition.

If it’s still in good shape with functional controllers and no missing components, then it could cost higher than that.

But if it has shown signs of wear and tear, it could be lower.

3. Why are SNES games so expensive?

There are many factors that come into play. First of all, keep in mind that the SNES is an old system, so are the cartridges.

Thus, the quantity of functional ones on the market is limited.

The lack of supply then led to an increase in the price of these items.

In other words, some games are expensive because they are much harder to find.

It could be because they were produced in limited numbers, or they were supposed to be destroyed like tournament cartridges.

It’s a combination of several factors. Firstly, it had a limited print.

Secondly, the game belongs to the Mega Man franchise. Simply put, it’s a rare game from a popular franchise.

This is a perfect combo for a staggering resale price.

The box it came in also makes a difference.

You may notice that old consoles that come with the original box sell for higher prices than those that don’t.

Apparently, original boxes are quite valuable.

6. What are some of the most valuable SNES games?

They have been included in this article. Please scroll back up to find out.

If you need more references, please check them on sites that list out all of SNES games and their market prices.

Final Thoughts on Rare and Most Expensive SNES Games Cartridge

Is it worth it to buy one of the most expensive SNES games of all time?

One thing for sure, there has to be a reason why a game has an exorbitant price.

Many cartridges that sell for high prices turn out to be rare items that used to be produced in limited quantities.

Over time, the number of copies that remain in good shape has dwindled, leaving only a few available for sale.

Under such a circumstance, it’s totally acceptable if the price would skyrocket.

The demand is still there, and many are willing to up their budget to get their hands on it.