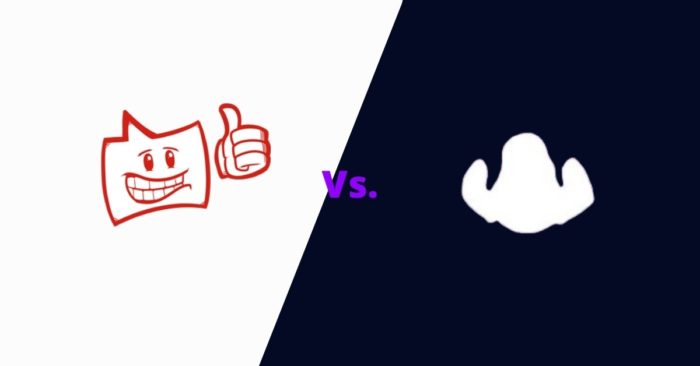 Installing an emotes extension is mandatory if you don’t want to see a bunch of characters flooding the chat window.

Emotes are very popular that seeing weird character combinations would be commonplace if you haven’t installed this add-on.

It serves to convert chat commands into icons. There are several choices, including FrankerFaceZ vs BTTV.

Which one snags the title as the better extension?

What are BetterTTV and FrankerFaceZ?

If it’s a popularity contest, BTTV would secure the winning title because it’s more popular than FFZ.

Case in point, it quadruples the number of users that FFZ has on Chrome.

While BTTV is ahead by quite a large margin, over 1 million users for FFZ aren’t something to brush aside.

That’s still a whole lot of installations. However, we shouldn’t just compare their success. The varying features between them are also worth considering.

FrankerFaceZ or FFZ is a browser extension designed to enhance the Twitch experience by incorporating cool emotes into the chat.

Those who watch broadcast a lot must be familiar with Twitch lingoes like Pepega, Kappa, LUL, and others.

Each one has a meaning, but if you actually see words instead of emotes, you may have missed out on FFZ.

This extension will ensure your eyes aren’t bombarded with puzzling words each time you check out the chatbox.

What it does is convert words into emotes as long as they’re correct commands.

FFZ allows the user to use custom emotes and modify the interface with its breadth of options.

BetterTTV is also a browser extension for displaying emotes. The perk of installing it is you can circumvent the restriction of using emotes on Twitch.

Besides, enabling it also gives you leeway to upload personal emotes and share them with the community. Not only that, the slots provided are generous.

As we know, to qualify for using emotes, a streamer has to be an affiliate or a partner. And it takes time to grow the slots since they’re added gradually.

BTTV is compatible with several browsers, such as Opera, Firefox, and Chrome.

Do streamers use BTTV?

Yes, it’s the ultimate choice for many streamers. BTTV is the one you’d likely come across during the search for an emotes extension.

Besides making the chat more expressive, streamers also install BTTV to provide convenience to their fans.

Seeing unfathomable text in the chat may irk them. The best you can do as a streamer is to use BTTV, so they’d see images.

Is BTTV better or FrankerFaceZ?

Both are jam-packed with features, but there are still differences that distinguish the two.

In terms of popularity, BTTV has the upper hand at least on Chrome. But comparing the emote slots, FFZ would be more appealing with its 25 free slots as opposed to 15 for BTTV.

That said, BTTV can close the gap when the entire slots are unlocked. Mind you, it offers a premium plan which constantly adds in new slots if you stay subscribed to the service.

Another point of difference is BTTV includes GIF emotes, while FFZ doesn’t. This could be a deal-breaker if you have the desire to use GIFs.

When it comes to features, BTTV is noticeably more feature-rich than FrankerFaceZ although all the FFZ features mentioned above prove that it remains a solid choice.

Is FrankerFaceZ compatible with BTTV?

The answer is yes. However, you need to do some configuration in Settings.

Right after you’ve installed FFZ, navigate to ‘FrankerFaceZ Control Center’, and then select Add-On from the left panel.

Search for ‘BetterTTV Emotes’. It has the signature smiley icon on the thumbnail. The ‘Enable’ button is right below the program description.

Click on it, this would complete the setup process. If we might add, activating this add-on is a good decision knowing BTTV has become a staple on Twitch.

Why use a browser extension for Twitch emotes?

That’s because it’s fundamental for proper viewing of the Twitch chat.

If you use it a lot to have conversations with viewers, it would be irritating to see codes instead of emotes.

You can’t really decipher what a command means because it’s just a bunch of characters that often don’t make sense.

For example, MonkaS, Pepega, PRChase, you might struggle to comprehend these if they show up in chat. While some are quite descriptive, it’s still easier if we just see emotes.

There’s no need to pit FrankerFaceZ vs BTTV against each other because there aren’t too many extensions available to display emotes on Twitch.

Despite the differences, these two just happen to be heavyweights loaded with robust features.

So rather than trying to pinpoint the weaknesses, we should learn what makes them excellent.

To put it succinctly, both are awesome, and using them concomitantly allows you to maximize your emote slots.