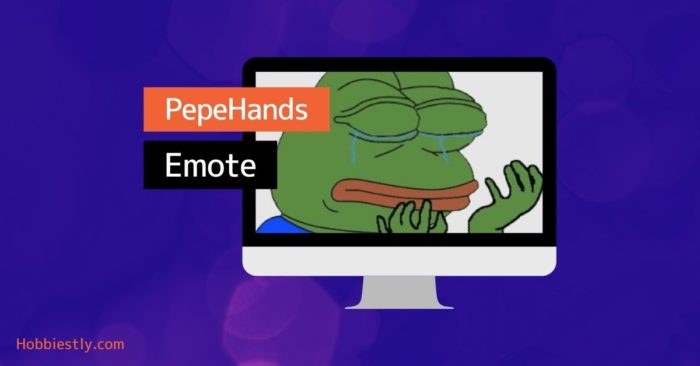 PepeHands Twitch emote went on a long journey to become what it is today, but it was worth it. This emote brings back memories of when Pepe couldn’t be pushed out of his way. if you want to find out everything there is to know about Pepehands, this is the place for you.

What does the PepeHands emote mean on Twitch?

Pepe has spawned an assorted of emote variants with different expressions and messages.

This is another awesome take from the influential emote.

PepeHands depicts Pepe pulling a sad look, eyes shut, and hands up in front of his face as if he’s crying over an unfortunate incident.

His body language takes the guesswork out of deciphering the intent of this emote.

The meaning is literal, to show sadness to others.

If you fail to utter your dejection with words, posting this emote in the chat will convey that.

On another note, the hands are a significant part of the design. You can imagine Pepe uses them to wipe the tears running down his face.

It entered the FrankerFaceZ library in 2016, and we can thank OinkerBob for seizing the initiative to make it known on the platform.

The PepeHands emote’s origins and spread

PepeHands went on a long journey to be what it is today. This emote harkens back to the days when Pepe was inescapable.

Well, that makes sense because it didn’t emerge recently. It’s over 5 years old now, first added to FFZ by OinkerBob in September 2016.

It didn’t suddenly capture widespread attention but was more of a gradual process.

It started to pick up steam in 2017 after it found its way to subreddit: /r/forsen.

It’s not hard to predict the outcome because this community is responsible for some emotes’ newfound popularity.

For those unaware, /r/forsen is a space to provide emote suggestions that the streamer might use in his channel.

While the post didn’t gather tons of upvotes, it took a turn for the better when the streamer spotted it himself.

He gave it a shoutout on his broadcast, which led to his legion of fans checking it out.

That little aid breathed a new life to this emote. And it quickly became a new popular variant from the Pepe family.

When should I use the PepeHands emote on Twitch?

This emote unveils profound sadness, so it’s suitable for when you feel very miserable.

The hands put more emphasis on that. It’s like Pepe can no longer cope with his sadness and wants to cry his heart out.

The tears gushing from his eyes also reinforce that impression.

You can use this emote anytime you’re stuck in the same situation. Oddly enough, some viewers choose to be ironic with it.

They aren’t really in a state of sadness but post it just to seek attention.

Whatever the case, this emote is accessible at your disposal, so use it however you desire.

How do you get PepeHands emote on Twitch?

PepeHands are spammed daily on Twitch. You can see the word posted multiple times by different users.

The thing is if you see text instead of the upset Pepe, it’s a telltale sign that you haven’t installed an extension to convert the code.

There aren’t too many choices, but the ones available for use are legit, including FrankerFaceZ and BTTV.

They have a few things in common, but activating them at the same gives you the best of both worlds.

Each extension has its own quota for personal emotes. So by combining the two, you can add more custom emotes.

The setup is fairly simple. Navigate to the web store or extension library.

Find the plugin, and then select ‘Add to Browser’. The settings can be configured via their respective control centers.

Why is the PepeHands emote not working?

If it’s not working as in not showing as an image, it’s definitely because you have none of these extensions installed.

A special program is required to read the command. To solve the problem, add an emotes extension of your choice to the browser.