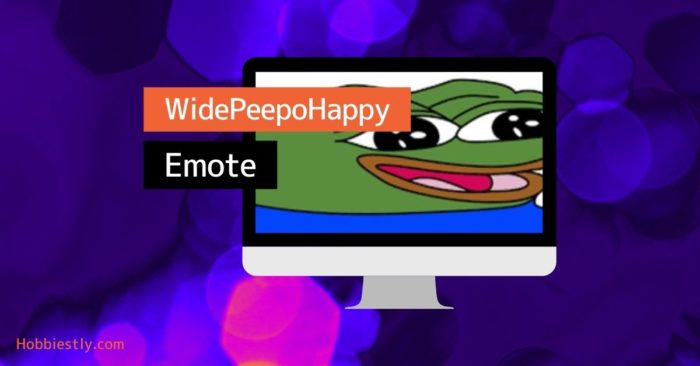 Widepeepohappy Twitch Emote began in 2018. This emote took three years to gain popularity, even when carried by a famous character like Pepe the frog. This article is for you if you want to know everything about widepeepoHappy.

What does the widepeepoHappy emote mean on Twitch?

Even with a severely distorted face, most of us can make out the face behind the widepeepoHappy emote.

If you suspected it was Pepe the frog, you’re correct.

This emote is modeled after the character, but the stark difference is in this, he appears so stretched to the point where his face doesn’t look proportionate at all.

Pepe’s massive popularity has given rise to new variants based on him.

What’s more mind-boggling is some can keep up with the original’s universal recognition.

This emote depicts Pepe with a smiley face. And widepeepoHappy is just a derivative of that.

Look at them side by side and see where they differ. It’s clear one looks normal, while the other appears elongated.

In terms of meaning, this emote denotes jubilant happiness.

When people use the short name, they’re likely referring to this specific emote.

They’re probably just too lazy to type in all the characters.

So yes, even without the suffix, widepeepo is still this emote’s appellation.

widepeepoHappy emote has been around for more than 3 years, was uploaded to FFZ by user black__tic_tac.

Approximating to variants that made it big around the same time, this emote has also been growing steadily since, raking in over 147,000 additions across Twitch channels.

The fact that it’s based on Pepe got it off to a good start.

The widepeepoHappy emote’s origins and spread

Its origins can be traced back to FrankerFaceZ in 2018.

Three years is a long time for an emote to gain popularity, especially when it’s carried by a well-known figure like Pepe the frog.

It has a winning formula for self-sufficiency.

While not every Pepe’s offspring will be the center of attention, this one appears to be the result of his influence in the gaming community.

Also Read: Why Can’t I See Emotes On Twitch Chat?

When should I use the widepeepoHappy emote on Twitch?

It’s anytime you feel ecstatic about a situation.

For example, if you see your favorite streamer in a match and they manage to beat the opposing team, you can use this emote to express your elation.

The meaning of an emote is typically discernible. It’s the name that makes it difficult to comprehend.

In this case, widepeepoHappy portrays an effervescent frog, so it’s suitable for moments filled with joy and happiness.

How do you get widepeepoHappy emote on Twitch?

You can do it in the same manner as enabling Pepega or Sadge.

All the fuss about emotes not showing usually stems from one simple mistake, not installing a third-party extension like FrankerFaceZ or BetterTTV.

However, it’s not your fault because not all are enlightened on this matter.

Someone who just started using Twitch might be oblivious to the significance of this add-on, thinking that the stream would work just fine without it.

Nope, the chat window will be a messy field without it. Setup is easy, as you just need to visit the official site of either extension.

Find the download link there. Once you’ve stumbled across it, add it to your web browser. Modify the settings in the chat.

Breaking into a wide smile is just the body’s natural response to overwhelming joy.

Since wide smiles are synonymous with this emotion, people came up with this variation of the peepoHappy to amplify the meaning.

That’s how it got its squeezed look.

What is the difference between Pepe and peepo?

Pepe is the antecedent who paved the way for all these variants, including peepo.

The difference in cultural impact and legacy is obvious although they’re similar visually.