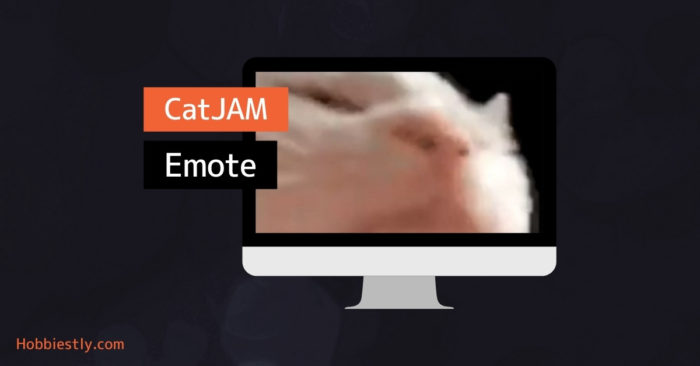 The CatJAM Twitch emote was originated from a viral Tiktok video uploaded in 2020 by Tiktok user Micklagi. It quickly spread across the internet, becoming even more popular among Twitch streamers. This article will tell you everything you need to know about this emote.

What does the CatJAM emote mean on Twitch?

CatJAM is a very popular Twitch emote. The name actually hints at its visual representation.

CatJAM is an emote showing a cat jamming to the music. The hilarious part is the cat moves its head in rhythm like it’s feeling itself.

It was extracted from a video and gained traction on Twitch after high-profile streamers featured it on their channels.

If you’re wondering about the meaning, it could be interpreted as getting pleasure from music playing on a stream.

Like if you hear it every once in a while, using this as a sign of approval shows that you enjoy what’s presented.

Some also use it for songs they don’t like only to show gratitude to the streamer.

This emote originated from a viral Tiktok video.

Tiktok is like the epicenter of pop culture, so the thought of it coming from the platform is barely surprising.

For your information, the particular video was first uploaded by user Micklagi on April 15th of 2020. It made the rounds across the internet thanks to its viral potential.

Seeing a cat doing this is surely amusing to everyone, no?

One of the most notable videos featuring the emote is published by Bilal Göregen on his Youtube channel where the cat bobs its head to the instrument playing.

It has amassed over 80 million views. You can check out the video below:

The CatJAM emote’s origins and spread

It all started on Tiktok with a viral video and then gained mainstream recognition because people apparently liked it and rapidly spread to others.

Twitch also paved the way for its boost in popularity because user MadLittleCat introduced it to the chat via BetterTTV.

This got attention from a big streamer named xQcOW after being reposted on the r/xqcow subreddit.

The stars aligned for CatJAM because ever since the post gathered tons of upvotes and piqued xQcOW’s interest, his followers took notice by sharing it in their circles.

And with other famous streamers jumping on the hype train, it became more omnipresent.

When should I use the CatJAM emote on Twitch?

You can use it when you’re overjoyed with the music playing in a stream.

Perhaps, that’s your favorite song or you just feel rejuvenated after hearing all the sound effects in the broadcast.

A catchy song would be a breath of fresh air in this situation.

Even if that’s not your type of music, this emote is relevant if you want to thank the streamer for putting in the effort to please their viewers.

How do you get CatJAM emote on Twitch?

You should install BetterTTV on your web browser. This extension helps convert commands into images.

On top of that, you can also create custom emotes yourself.

The setup is forthright. Find it on the Web Store if you use Chrome or the extension library if you’re a Firefox user. For another browser, the direct link can be found on the official site.

You’ll find new links to BTTV settings once the installation is successful.

Adding CatJAM would require you to log into the BTTV dashboard and select the emote from the list.

Why is the CatJAM emote not working?

There are several things that might trigger the issue. The most palpable one is when a user hasn’t added an emotes extension to their browser.

This add-on helps translate the code so that you can unveil the image behind it.

It’s also worth remembering that Twitch emotes are case-sensitive. They need to be inputted with the exact capital and lowercase letters. Since CatJAM has both, make sure to type it correctly.