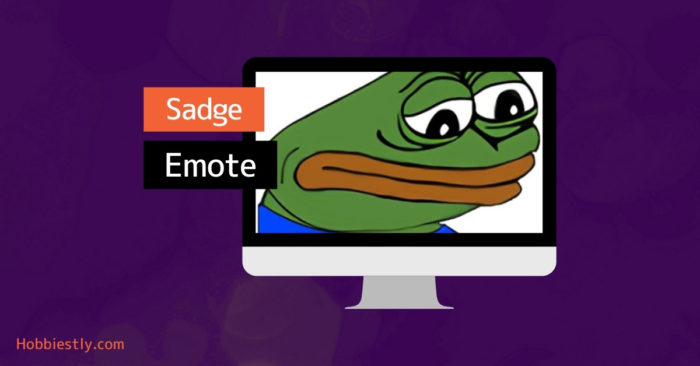 What does the Sadge emote mean on Twitch?

The Sadge Twitch emote is based on Pepe the frog. It pulls this expression as if he’s very sad about something, which is exactly what the emotion it’s trying to convey.

People often use it in a sarcastic manner rather than truly express actual sadness.

However, it might also reflect disappointment, so it all comes down to the intent.

The vibe of the emote is melancholy, which shows from his anguished face.

That said, if you want to be cynical about a situation with it, that would be appropriate, too.

How to pronounce “Sadge” on Twitch?

There are several ways for speaking the word. You can either say it in two syllables as sad-geh, or it can be shortened into one syllable just like how you pronounce ‘sad’.

But since it’s ‘Sadge’, it would sound more like ‘saj’. This fits the context given that the emote expresses despondency.

Also Read: What is a Twitch Emote?

The use of this emote can be traced back to 2009. It already felt familiar by that point knowing it’s t a derivative of Pepe the frog.

This miserable-looking guy made its debut on 4chan.

There’s a specific thread on that board that brought up the image. It got its second wind after it was introduced to BTTV, an extension especially designed to display custom emotes in the Twitch chat.

Redshell was the account responsible for its submission. It spread like a wildfire and found use in over 120,000 channels.

Another breakthrough moment for the anthropomorphic character is when the emote was uploaded by vicneeel to FrankerFaceZ, which is another major emotes extension.

The Sadge emote’s origins and spread

The origin has been outlined above. As for the spread, the catalyst of its exploding popularity is attributed to two streamers, Forsen and AdmiralBulldog.

Their fans propelled the iconic emote to new heights. On Forsen’s part, it coincided with the rising usage of copypasta.

Mind you, copypasta is a term describing a block of text that gets copied and pasted all over the internet.

It sounds like spamming in a way, but the constant use ended up making Sadge memorable because it’s used in funny phrases by people.

When should I use the Sadge emote on Twitch?

You can use it when you’re genuinely upset about something. But as addressed before, it can also be used to throw shade or ridicule a person.

We know that vacant sadness can emanate from the face. However, some people are good at acting.

The emotions they try to articulate are not coherent with how they feel inside. Imagine someone with a long face burst into laughter seconds later to fool you.

This is the kind of impression you may get from this emote, so we can’t blame if people don’t take it seriously.

How do you get Sadge emote on Twitch?

To use it, you can install BetterTTV or FFZ on your web browser.

To add, all you have to do is go to the Extension Store / Library, find either add-on and then click ‘Add to Chrome / Firefox / Opera, etc.’

After installation, the new settings will appear in the Twitch chat, but make sure to log in first using your Twitch account for authentication.

You can add and delete emotes on the extension dashboard.

Sadge is categorized as a global emote, which means you can simply select it from the library. The ones that you craft on your own belongings in channel emotes. These are specific to channels and their viewers.

Why is the Sadge emote not working?

Oftentimes, this occurs when one hasn’t installed FFZ or BTTV.

If you’ve installed it and the problem persists, try to refresh the chat window by pressing CTRL + F5.

Or did you notice that when viewing Twitch on mobile? If so, the underlying cause is palpable.

Neither extension has support for mobile, yet. You should use a desktop computer to open up the chat.

Another solution is clearing the browser cache and cookies. This has been proven to solve various problems.