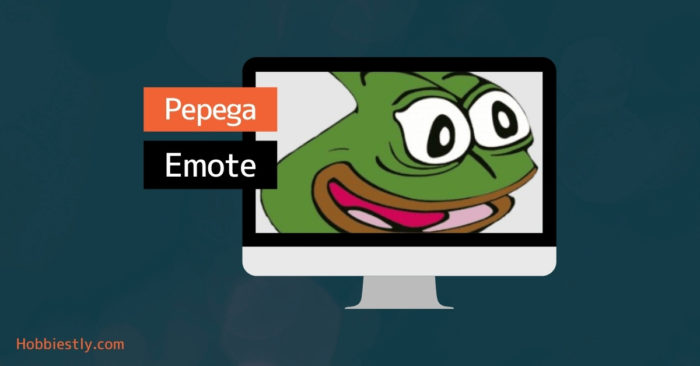 Pepega’s origins can be traced back to 2018 on Discord. The original design was created by Adew, one of the platform’s users. This post will tell you everything you need to know about the Pepega Twitch Emote.

What does the Pepega emote mean on Twitch?

You probably don’t know that some of the most popular Twitch emotes, are inspired by Pepe the frog, including Pepega.

It’s often used to throw insults at someone who does something stupid or bizarre.

Pepega is often associated with the word ‘retard’, but many find this pejorative term unacceptable for offending people with intellectual disabilities.

Hence, some resort to this image portrayal to say the word without the risk of hurting somebody’s feelings.

The history of Pepega dates back to 2018 on Discord.

One of the users on the platform named Adew came up with the original design.

He was also responsible for giving this uber-popular emote a name.

It first stirred up a commotion in Forsen’s Twitch chat. The emote got repeatedly reposted by his viewers in an attempt to remove it for good.

They didn’t want it to be part of the streamer’s catalog. So by using it in massive amounts, they hoped that it would be flagged as spam, and thus, banned from existence.

What happened was the exact opposite. The frequent use resulted in it gaining traction in the community.

It was also never forbidden, which further bolstered its popularity.

Read also: What is a Twitch Emote?

The Pepega emote’s origins and spread

In a nutshell, it all started on Discord, and then found its way to Twitch. And when it got attention from Forsen’s fans, the rest is history.

It’s not the first time this streamer has a hand in making an emote popular.

Malding is another one that gained momentum after it managed to sneak into his Twitch chat.

Pepega follows in the footsteps of many famous Twitch emotes which come from users with no direct affiliation with top-tier streamers.

But eventually, they’re able to rise to prominence.

When should I use the Pepega emote on Twitch?

The emote can be used when you notice a streamer or another in the chat does something stupid. Some use it as a substitute for ‘idiot’.

Again, this term is rather derogatory because it’s used in the medical field to classify people with mental development not exceeding that of a 2-year old.

The same goes for ‘imbecile’ and ‘moron’. People in good conscience try to avoid them at all costs.

Pepega has a similar connotation, but can also be used in a joking manner instead of straight-up mocking somebody.

Another situation where it’s befitting is when you want to tease a streamer who fails to do something.

All in all, this emote isn’t supposed to be used in a positive light like to encourage a fellow viewer or a streamer.

It’s actually the other way around, but context still matters.

As long as you’re not trying to be contemptuous, then it shouldn’t be outrageous to use the emote.

How do you get Pepega emote on Twitch?

Pepega is part of the global emotes, so you’d need to install an extension that supports its viewing on the web browser.

In this case, BTTV is the obvious pick since it’s one of the few extensions for this purpose.

This add-on is available for popular browsers, like Chrome, Firefox, and Opera.

So if you use one of these, you can add it to enhance the Twitch chat experience. What you’re gonna do is find this add-on the Web Store or Extension Library.

Once added, navigate to the BTTV site, and then log in using your Twitch username and password.

Allow for the authentication process. On the dashboard, you can select Pepega from the emote list.

“Pepega” is a derogatory term. Slurs for people with mental disabilities are often used interchangeably with the term “mentally retarded” (the “r” word).

When a streamer does something stupid or embarrassing, such as missing an easy kill or dying, Pepega is frequently used in the chat.

Read also: Why Can’t I See Emotes on Twitch Chat?

Why can’t I see Pepega on Twitch?

Pepega requires a user to install an extension like BTTV or FFZ.

Otherwise, it won’t work and you would see it as text instead of the distorted Pepe character.

So, the first crucial thing is enabling either plugin on your browser.

If it happens after you’ve had it installed, try to clear the cache and browser. And then, relaunch the browser and see if the error is resolved.