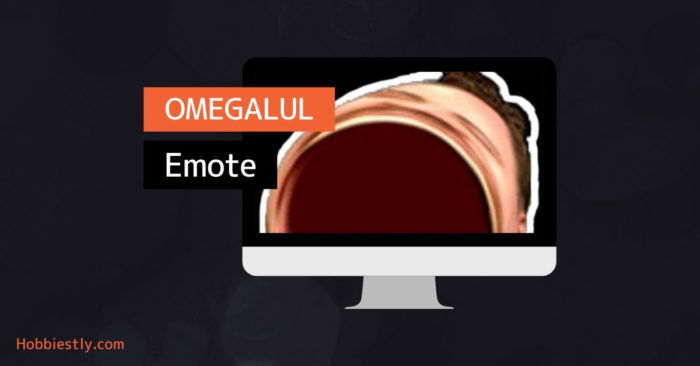 The OMEGALUL Twitch Emote has been used in over 442,000 BTTV channels. It also has a strong showing in FFZ, where it has been featured in over 189,000 channels. Do you want to use it on your channel? This article will tell you everything you need to know about this interesting emote.

What does the OMEGALUL emote mean on Twitch?

At first, it’s difficult to make out the concept of this emote. It resembles the letter O, albeit a very different one.

To clarify, the real image of this emote is an edited version of LUL, which is another famous Twitch emote.

Despite having more syllables, some prefer to use OMEGALUL than the shorter counterpart. The meaning is literal, to express how funny something is.

OMEGALUL was added to FFZ by user DourGent in September 2016. Not long after, it crossed over to BTTV.

The popularity of this variant doesn’t make the original relegated to the back seat.

It has now become part of the global emotes on Twitch after its official announcement in September 2017.

LUL and OMEGALUL gained mainstream recognition alongside each other.

As evidence of its popularity, OMEGALUL has been used in more than 442,000 channels on BTTV. It also scores an impressive figure in FFZ where it’s been featured in over 189,000 channels.

The OMEGALUL emote’s origins and spread

The face behind the emote is a video gaming commentator named John Bain who is also popular as TotalBiscuit.

OMEGALUL is inseparable from LUL, and how the latter materialized, there’s a unique story behind it. It all started from a disagreement between Bain and the photographer who took the pic of him.

Bain made that particular photo a base for the LUL emote but then got a DMCA copyright notice from the creator.

Normally people respond to an infringement claim by taking down the disputed image, but Bain had a different idea.

Instead of caving in, he aggravated the situation by posting a version of it on BTTV. Surprisingly, it thrived on its own, which culminated in its introduction as an official Twitch emote in 2017.

As for OMEGALUL, the rise can be attributed to Forsen’s followers who worked relentlessly to bring it into the consciousness of the Twitch community.

They’re experts when it comes to orchestrating raids in Twitch chats, and OMEGALUL is lucky to derive an advantage from that.

When should I use the OMEGALUL emote on Twitch?

This emote conveys the same emotion as the word ‘LOL’ or ‘ROFL’. If a streamer does something you find funny, post this emote to express your reaction.

That would be more fitting if you actually burst into laughter after witnessing that incident.

It may have to do with the streamer’s poor performance or the way they interact with viewers that feels borderline stupid.

Or perhaps, they just have a funny personality that they won’t stop cracking jokes to make viewers laugh.

How do you get OMEGALUL emote on Twitch?

To make it visible, you must install the FFZ extension. BTTV also has the emote in its collection, so you can consider adding this as well.

Without any of these add-ons, OMEGALUL will display as text. Don’t fret about the setup because it’s quite hassle-free. Just do it like adding a regular extension on the web browser.

You can navigate to the Web Store, locate the plugin, and then Add to Chrome.

To fiddle with settings, go to the BTTV links that now come integrated with the chat.

What happened to OMEGALUL? Why can’t I see OMEGALUL on Twitch?

Have you followed the suggestion to add BTTV or FrankerFaceZ?

If not, that means you refused to acknowledge the elephant in the room. Remember that a third-party extension is obligatory for a proper showing of emotes.

Both the streamer and viewers should enable it on their desktop computers. Otherwise, it won’t work.

Another solution is to reinstall some extensions in case there are conflicts between extensions.

Additionally, it should be noted that OMEGALUL is written all in capital letters. This is the format you should use in chat to trigger the function.