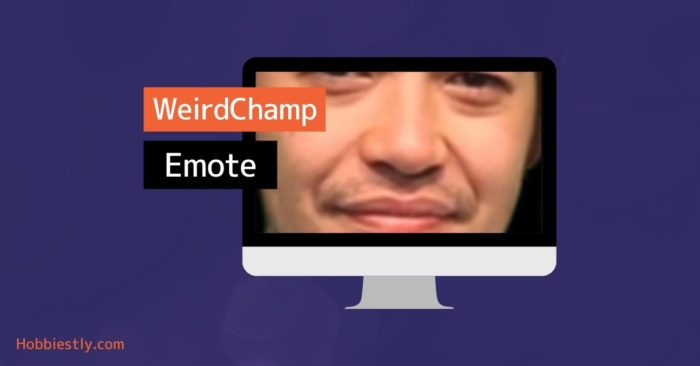 Another emote that was inspired by PogChamp is the WeirdChamp twitch emote. Ryan Gutierrez, commonly known as Gootecks, was the initial face behind it. If you want to learn more about this fascinating emote, read more in this post.

What does the WeirdChamp emote mean on Twitch?

WeirdChamp is another Twitch emote that draws inspiration from PogChamp.

The face behind it is the same person, Ryan Gutierrez or also known as Gootecks. But despite that, their meanings are polar opposites.

It’s like when something doesn’t go as you wish, you can voice your displeasure with this emote. The facial expression is very indicative of that.

The idea of a new variant of PogChamp with a different vibe came from some Redditors.

They proposed another emote which showed Gutierrez’s face in disbelief.

His expression is indeed quite bewildering in this particular emote. It’s almost like a smiley face, but not quite.

In response to that request, Nyrolol published the emote under that name in FrankerFaceZ.

And after a while, it also made an appearance on BTTV.

Also Read: What is a Twitch Emote?

The WeirdChamp emote’s origins and spread

Some Twitch emotes trod a long path to prominence.

It’s not as instant as you think, but then there are some that have it easier like WeirdChamp.

The emote was created in reference to PogChamp, which was already a household name by then.

Hence, it’s not surprising that this variant could reap some success.

To put it chronologically, a Reddit user posted the emote on the /r/forsen subreddit.

If you pay close attention, this subreddit is where many famous Twitch emotes originated.

So to see it becoming an instigator of WeirdChamp’s skyrocketing popularity is conceivable.

As for how the name came about, the poster originally wanted to call it feelsweirdpog.

Another user gave the nod but insisted that it would sound better with a different moniker.

Somebody else replied with ‘WeirdChamp’, which influenced the final decision.

Later this emote made it to the /r/xqcow subreddit where it became the subject of heated debate because it’s used aplenty without restraint.

When should I use the WeirdChamp emote on Twitch?

This emote feels genuine when you’re lost for words to utter your disappointment.

Like when a streamer did a mishap during the play that caused them to lose, this emote would sum up how you feel about the situation.

Another example is if the streamer got into an argument with viewers and believed that their opinion holds more weight than others.

In this scenario, the streamer shouldn’t be taken aback by the onslaught of WeirdChamp emotes in the chat because many disagreed with their stance on the discussed matter.

This might also happen when the streamer is blinded by their self-confidence that they made a claim to win the game only to be defeated mercilessly later.

This level of pomposity warrants a WeirdChamp raid.

How do you get WeirdChamp emote on Twitch?

We’ve touched on this many times already. You’d need an emotes extension to enable this in the Twitch chat.

You can consider BTTV or FFZ.

There’s no need to go through an intricate setup process to make the emote visible. Just visit the official site.

You’ll be provided with the download link on the landing page, but make sure to match the selection to your browser.

It should detect automatically, just click the download button. This will open up the extension page on the browser’s library.

Simply click ‘Add to Chrome / Firefox / etc.’ Once added, the emote should be accessible in the chat, it will no longer display as text.

No, it’s still there in FrankerFaceZ and BetterTTV.

However, you will no longer see this emote on Twitch because Twitch banned the PogChamp, including WeirdChamp, emotes in early 2021 after Ryan “Gootecks” Gutierrez tweeted about further “civil unrest” in the United States Capitol.

If you use either FFZ or BTTV and still can’t view it on your chatbox, there’s probably an issue with your connection.

Please make sure it’s stable and most importantly, working, not under maintenance.

If this didn’t fix the problem, rebooting the PC and relaunching the browser after clearing cache/cookies might help.