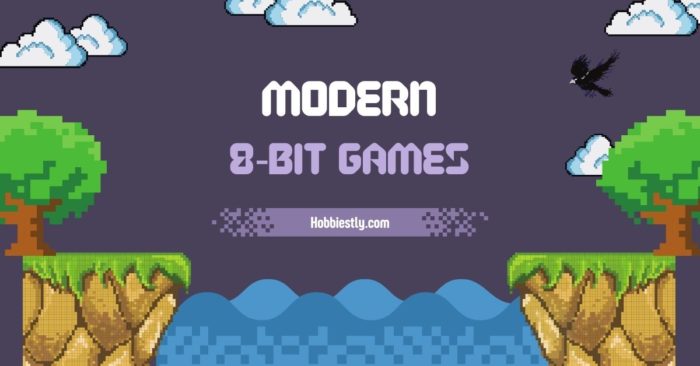 Although graphics have advanced by leaps and bounds in recent years, many people can’t let go of their passion for retro games.

The nostalgia hits hard when you see them playing in front of your eyes.

Developers seem to be aware of the growing appetite for these classics, so they decide to develop their own versions of modern 8-bit games.

They may fall within the realm of pixel art, but the presentation has no direct correlation to the limited resources to produce smoother graphics.

The rendered visuals are totally conditioned that way to reinforce the retro vibe.

Back then, game makers had to work around many limitations, and the pixelated graphics came as a result.

The graphics of this game are deceptive, giving the notion that it came straight from the NES era.

It’s actually a modern game that adopts the art style of 8-bit games. Mind you, it’s one in its niche that’s met with great success.

There are elements in this game that take you back to the bygone days when retro games ruled the world.

The non-linearity, gameplay, combat, and bosses are reminiscent of the retro classics.

The protagonist’s main weapon to defeat the enemies is a shovel, which can attack and dig treasure.

He’s on a quest to meet a salesman who can help him acquire secondary items with hidden magical power.

Spectra is a retro-inspired game that offers you an intergalactic adventure.

The premise is to avoid objects scattered throughout the tract. As the ship moves along the track, you will collect points.

Try to get as many points as possible until the music stops.

The music itself is produced by the talented composer Chipzel that you can check out on this link (https://chipzel.co.uk/album/spectra). There are 10 tracks in total.

When all have been unlocked, the player will jump into the hardcore mode.

Nothing changes in this mode except for the noticeable increase in speed and amount of obstacles.

There are many epic moments in the game. Besides the interesting characters, it’s also loaded with funny dialogue.

Other than that, the music makes a big difference in how we experience the game.

Undertale tells a story about a child who fell and got trapped underground.

You take the role of the child. And on your mission to find a way out, you’ll encounter plenty of monsters.

Normally, in such a circumstance, the player is required to kill them to move forward, but in this game, you can pacify them instead to escape.

This is the kind of game that has the potential to stick for long.

It might get a cult following because it really sets the bar for modern 2D games with its meaningful story.

Don’t let the simple graphics mislead you into thinking that the gameplay will be that simple.

The serious difficulty can be construed as the constant hardships the character has to overcome.

It’s one of the most well-known characters from the retro era of video games.

This title is reminiscent of Sonic games released on Genesis, but it has an overhaul on many fronts this time.

Yes, there are some retained elements, but the overall experience is great, if not better.

The side-scrolling game takes you through the 12 levels with 3 different characters available to play.

This game was stripped of a release date after being developed for roughly 9 years.

Well, that’s worth the wait because the 2D platform is nothing short of fantastic.

It takes place in the sky, and the islands beneath it were divided into parts following a disastrous incident.

Here you play Otus to fly and grasp objects while flying.

These items are what you’ll utilize as weapons. Further, into the game, you’ll meet companions to help you through the adventure.

The Messenger pretty much encapsulates the glory of classic games, which immerses you in a fun exploration with some action and a compelling storyline.

These things make 8-bit games unforgettable, especially when you played them growing up.

This one is a blast from the past; it takes you down memory lane with its imaginative plot and characters.

Wrapping up the modern 8 bit games

Video games have come a long way, but the retro classics have always had their charm.

They seem out of place, juxtaposing with modern games with detailed and real graphics.

But even so, these gems are irreplaceable.

And suppose you think you can only hold on to memories. In that case, those mentioned above, modern 8-bit games will satisfy your yearning for the pixelated games you played as a kid.

Rare SNES Games: Have You Ever Play Them?

Rare NES Games: Things That Every Gamer Should Know About