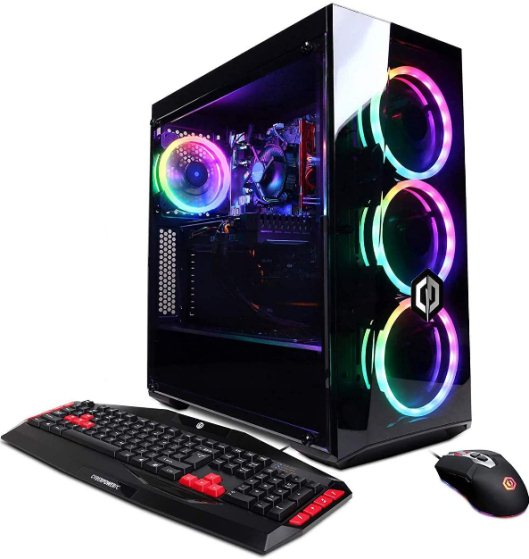 Buying a gaming PC is not an easy decision because it is not cheap. Well, to be fair, anything developed for gaming purposes usually comes with a hefty price tag. And that applies to gaming laptops, too.

Since it’s a major purchase, you should be careful to assess your needs. Make sure the PC is what you really want. A good computer is not one that costs a fortune, but one that can accommodate your gaming needs.

If you want to run graphics-heavy games on the system, then a PC with quality graphics card and processor is the way to go. But if you’re more of a casual gamer, then a top-of-the-line PC would be overkill.

Skytech Gaming is a brand you can trust for quality gaming desktop PCs. This is equipped with a Ryzen 5 2600 6-Core 3 4GHz processor that delivers exemplary performance.

It also boasts 500GB SSD, which marks a significant increase over a traditional HDD. In the graphics department, the PC relies on Nvidia GeForce RTX 2060 video card, which allows it to handle intense graphics without a problem.

As for the memory, the 16GB DEFAULT DDR4 is very spacious to run multiple programs simultaneously.

This is another offering from Skytech Gaming. A gaming PC doesn’t have to be expensive. Sure, there are many that cost thousands, but some are priced below the $1,000 mark, like this one. And for the price point, the specs are quite decent.

The components that make up this gaming system are included in the title. It gets its power from an Intel Core i5-9400F 6-core 2.9GHz processor. The storage capacity is large, but that it’s not the computer’s strongest suit.

As mentioned in the listing, the 500g SSD is also claimed up to 30 times faster than a regular HDD. Meanwhile, the graphics are handled by NVIDIA GeForce GTX 1660.

The memory is a slight decline in capacity, but it’s understandable given the lower price tag. 8 GB DDR4 is still large enough for you to run games smoothly.

A powerful processor does have an impact on performance, but a good thermal system is just as important. This gaming PC is powered by Intel Core i5-9400F processor that offers clock speeds of up to 4.10 GHz.

It ensures that you don’t experience lags while gaming. It feels even smoother that NVIDIA GeForce GTX 1660 Ti 6GB GDDR6 is part of the system.

In terms of memory, the 16GB RAM provides enough room for you to execute even the most demanding tasks. All these specs along with Solid State Drive make the PC not only great for gaming, but also to do complex tasks like video editing.

As we know, video editing tends to drain resources, so it a solid workhorse of a desktop PC. The connectivity options and ports are also varied. There are Bluetooth 4.2, Wifi, USB 2.0, HDMI, USB 3.1 Type-C Gen 1, and more.

It’s normal for something billed as a gaming device costs higher than average. This is another gaming PC that comes with a high price tag, but it has quality to back it up. It excels at nearly every front that makes a PC great for gaming.

For example, the graphics are ultra realistic. The NVIDIA(R) GeForce(R) RTX 2070 SUPER (TM) is the component behind the sense of realism produced by the system. Graphics-aside, the overall performance is magnificent.

Whether it’s PUBG or another AAA title, the PC can run it effortlessly thanks to the 9th Generation Intel Core i7-9700K processor.

Another feature you may find useful is software to let you make use of the system to its full potential. You can adjust the RBG lighting, play PC games on TV, to name a few.

Needless to say, a powerful gaming rig is a necessity to every avid gamer. With this powerful gaming PC, you can rise above the competition. It comes with one of the latest generation of the Intel Core processors, the i5-9400F 2.9GHz.

It also features spacious memory which amounts to 8GB (DDR4). It’s required to execute demanding processes that gaming is synonymous with.

The graphics card is also reliable. It will take your gaming experience to a new level. For those wondering if it supports VR, yes, it does.

It’s Oculus Rift and HTC Vive ready. You’ll also get a mouse and a keyboard, so there’s no need to look elsewhere if you haven’t bought both components.

The black exterior of this gaming PC looks like it’s trying to make a bold statement. Well, it’s not just the appearance, the price also speaks volumes that it’s not to be reckoned with.

This PC is the embodiment of a stylish design with great performance to follow. It features the 9th Generation Intel Core i7 processor for reliable computing.

Any title should run smoothly on this system because it provides the fastest processing possible.

And then, there’s the RTX 2080 which highlights the sense of realism in graphics. It’s regarded as one of the best cards for 4k gaming today.

There are more features to check out, such as 16GB DDR4, 256GB SSD, and front port access.

Price can be a marker for quality. Since this PC is quite affordable, don’t get your hopes especially for superb gaming performance. This computer can be used for gaming, but it terms of reliability, it’s not realistic to compare to it to systems that cost way higher.

For day-to-day computing, you can count on it. There are many highlights of this product.

First, it sports a space-saving design. If you struggle with space on your desktop, this will solve the problem. Performance-wise, the Intel Core i3-8100 doesn’t really lean towards gaming. It can do that, but for doing other tasks, it’s decent, too.

Furthermore, it comes with a good cooling system, which is a big concern for a PC as nonstop operation produces heat. Other essential specs included are 1TB HDD Storage, 8GB RAM, and 5.1 channel sound.

To know how it fares compared to the previous Acer PC, just look at the specs. The processor is 9th Gen Intel Core i5-9400, which turns the PC into a multitasking machine. Basically, this pc goes beyond a gaming system.

You can also use it for your daily computing needs. Combined with 512GB SSD of storage and 12GB DDR4 Memory, the PC really shows so much potential.

Does this desktop PC match the high price?

With all the specs, this would easily be a stunner in the gaming department. It’s not your regular PC, but one that’s highly optimized for gaming.

The AMD 8-Core Ryzen 7 processor is a fantastic piece of hardware, built to deliver exceptional performance and low power consumption.

It also features Armoury Crate utility that allows you to have easy control over system settings. Graphics are another area where it shines.

Thanks to the GeForce GTX 1660 Ti, in-game visuals look stunning and vivid. You can set it to full HD resolution and it won’t lose quality.

The best way to measure the performance of a PC is by knowing the specs.

First of all, this desktop gaming PC is quite expensive, but it doesn’t necessarily mean the price isn’t justified. If the specs are high-end, that it’s totally acceptable.

For performance, it utilizes an Intel Core i7-10700KF processor known for its impressive gaming performance and high overclocking capability.

Furthermore, the system is loaded with 16GB DDR4 memory and 1TB SSD storage. The ports are sufficient, which include display ports and HDMI.

Due to its importance in gaming, this feature is usually highlighted in a product. For the ultimate gaming performance, choose a PC that has quality GPU built into the system.

Gaming PCs are a different niche that should be differentiated from regular PCs. If you want to buy a computer for gaming, then it should be developed for this purpose.

While a processor is not the most fundamental aspect of a gaming system, it still has an impact on the overall performance. High-end gaming PCs often pack i5 or i7 processors.

You can buy one of these if you can afford one. But if not, it’s okay to settle with a mid or low-tier model.

RAM is also important because as you open a game, RAM will take over since data is loaded into it. The system won’t try to retrieve data from the hard drive because it’s less efficient than processing it in the RAM.

RAM is an acronym for Random Access Memory. It’s a form of storage where data is stored temporarily as it’s being worked on.

Bigger and faster RAM is better, not only due to its association with gaming, but also because it allows you to run more apps at a time without experiencing hiccups.

SSD or Solid State Drives are one type of hard drives commonly used in modern computers and laptops. The bigger the storage, the more data you can save in the drive.

For this reason, please pay attention to the capacity. While it’s not a major component as far as game performance in concerned, it still necessary to store all game data.

You can dream of the fanciest desktop gaming PC, but at the end of the day, your budget will have the final say.

If you don’t have a large sum to spend on a PC, then stop looking for high-end products unless it is for comparison purposes.

There are many choices in the mid-range category, so don’t worry.

Black Friday is the right moment to hunt down sales and offers. Many products are sold at lower prices on this day.

The best gaming PC Black Friday Deals may be tempting to buy, but it should be more than just about a discount.

Quality should still be on top of your priority list. A major discount is quite meaningless if it’s attached to a low quality product.

It’s likely that a store offers big discounts to clear out inventory. That’s not necessarily a bad thing, but for a gaming PC, performance is above everything.

It’s better to invest more in a quality product than buying a cheap one and then you end up feeling unsatisfied.