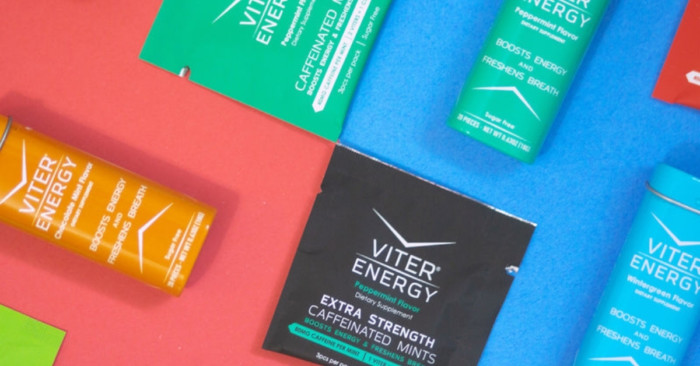 There’s no denying that coffee tastes good, but it also acts as a stimulant that can give you an energy boost when needed.

This property is attributed to the caffeine content in this drink. That’s why we often resort to it when we need to stay alert at night.

Viter Energy mints are a product by Viter Energy that contains caffeine. Hence, if you need an energy boost to get you going throughout the day, consider taking this supplement.

The mints are available in various flavors with a strong hint of menthol.

If you’ve never been a fan of strong mints, think twice before buying one because the taste may catch you off guard.

They look like typical minds, take on a round shape. Each mint weighs 900 mg and has 40mg of caffeine.

There are 20 pieces in each tin, which equals about 10 cups of coffee.

While they seem a lot, you’re not supposed to take them all at once.

One mint is enough to give a decent boost. They are packaged in small tins, which make them easy to carry wherever you go.

If you’re interested in how they came up with this product, the official site has it covered.

Basically, it all started with people attending the Dave Matthews concert in Washington.

And by the time the sun had set, it was only about to start, but they already felt tired.

They didn’t drink because it would cause an urge to pee, and they didn’t want to leave the venue.

As a result, they had a brilliant idea to make these tasty mints.

The company offers an opportunity to those who want to progress to higher levels.

It invites you to be part of the gaming team. And apparently, the offer isn’t limited to gamers.

Streamers can also join if they have something to offer to the company and want to promote it to their friends and family.

What can you get as a member? There are some, the details are as follows:

In addition to all these benefits, you can also be a part of the community that the company has established.

Let’s be honest, networking is essential online or offline.

Being involved in a community can help you in many ways because the members share similar interests.

To join the sponsorship program is easy, but you should know the things the company wants from its members.

These are common requests, though, so we’re sure you won’t feel burdened by them.

First, it requires members to promote the mints. This point is listed in nearly every sponsorship program.

Second, it wants you to provide free products to followers. If the company hands over some, give them away to your fans or followers.

Third, talk about the brand on your social media. For this, your content can be videos or photos.

Don’t forget to add relevant tags, so that people are aware that you’re endorsed by the company.

Those were the main points. Now if you’re ready to join, click here.