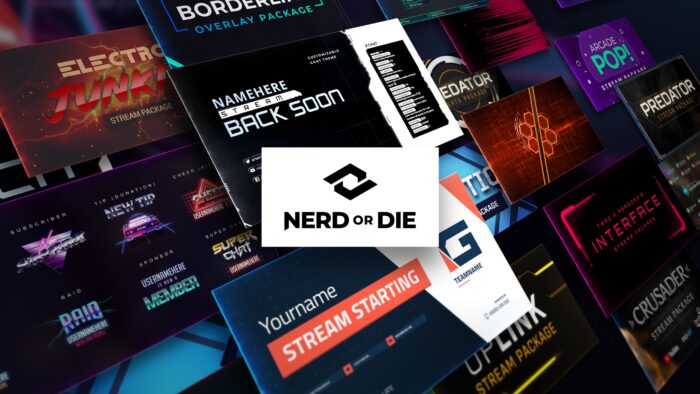 Creating an identity online is important as it helps people memorize you better and sets you apart from the rest.

That’s why personal branding is important.

There are many ways to do it, like by choosing a unique name or alias, creating a logo, apparel, etc.

If you’re a streamer, you can also customize the way your live streams appear.

Nerd or Die is a company that can help you with that. The company creates alerts, overlays, and similar products for live streams on various platforms, including Facebook Gaming, Youtube, and Twitch.

The company’s history can be traced back to 2011, but started to tap into the streaming scene in 2014.

Formerly known for its Youtube channel, Nerd or Die has transformed into a company that makes products for streamers to make live streams more interactive and engaging.

The channel provided tutorials about OBS and Twitch. And with a strong desire for streaming, the company was born.

At some point, it offered free resources to Twitch users, but then naturally progressed into a premium store.

It sells a lot of products, so it’s best to visit it, so that you can view the demos.

Aside from overlays, there are also sounds effects and stream packages.

We couldn’t find information about a streamer program on the site. The same goes for potential involvement in eSports.

It’s totally understandable because although streaming falls under the umbrella of gaming, it doesn’t really overlap with eSports.

There’s no denying that both are highly popular, but at its core, streaming and competitive gaming are two different things.

That said, sponsorships aren’t only available to eSports teams and players.

There are also similar programs offered to streamers. We just can’t find one on the site.

The affiliate program, on the other hand, is included on the homepage along with the company’s profile and other essential info.

Apply to Nerd or Die Sponsorship

Now if you’re more concerned about the affiliate, you’re lucky because everything is explained in detail.

The program is offered in different tiers with each being tied to unique benefits. Here’s the breakdown:

That’s it. If you want to join, open this URL. Scroll down to the bottom of the page and fill out the form.