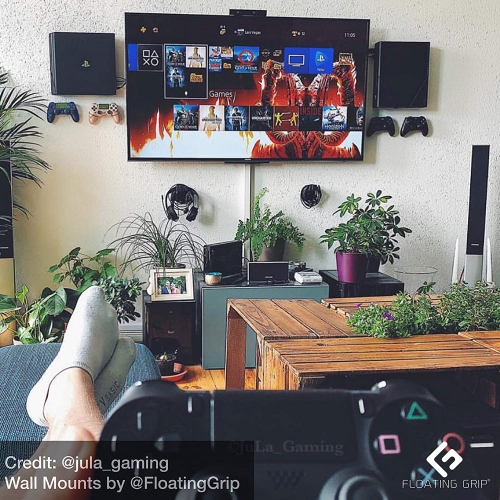 Floating Grip was founded by Stephanie Skov. The story of the company started when she created her first mount for the Playstation 4 in 2014.

At that time, her boyfriend really liked playing his Playstation 3 Slim. The problem was she struggled to find a perfect location for the console as it didn’t look neat with all the wires attached.

It was getting worse when she found out that the PS4’s launch was near. So if Philip aka his boyfriend decided to get his hands on the new console, that would leave them with 2.

Once he let her see a pic of the product, she ended up loving it. Thus, she tried to do something to not compromise the console or her home interior.

About 9 months after, a first wall mount was developed by her. And in 2014, Floating Grip was founded.

Today, the company not only sells one wall mount, but has produced more for different consoles, including the Xbox, Apple TV, and Nintendo Switch.

All products are manufactured in Denmark and have been distributed around the world with the help of external retailers.

Floating Grip has been supportive of competitive gaming.

There are some examples of that. The first one is when it formed a partnership with Starcade, a new eSports and gaming event.

The company stated that it had a passion for competition, which was what initiated the sponsorship. Floating Grip joined as the main partner for the FIFA tournament at the event.

Kristoffer took the role of the head of Starcade. He was responsible for managing partnerships and other things related to the event.

To the company, this deal was a perfect fit because it was built upon appreciation for consoles and FIFA happened to be a console-based game.

Another example of the company’s consistent support for the ecosystem is when it inked a sponsorship with Soerby eSports. Back when the deal started, the organization was still small with few members.

But now, over 250 members have joined forces, making it one of the prominent communities in Denmark.

Does Floating Grip offer an opportunity for internet marketers to generate extra income?

Yes, that program does exist and it has its own section on the site. However, there are several points you should note, such as:

Are you clear on the requirements?

If you think that you’re fit for the program, you can sign up here.

There are several things asked in the form, like how you’re going to promote. Make sure to fill in the necessary fields.