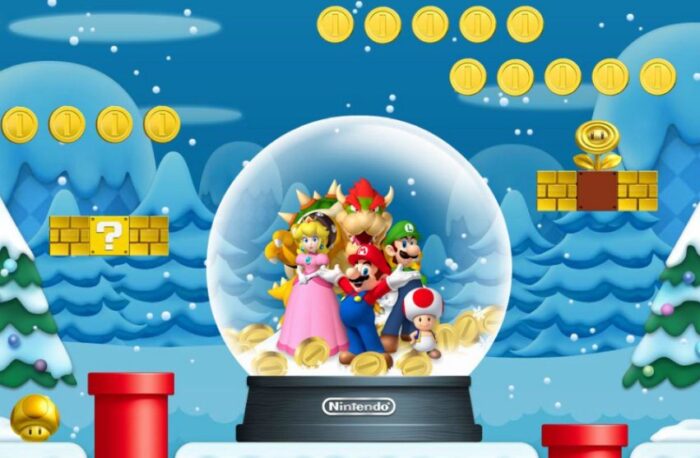 There are countless Christmas-themed wallpapers out there, but to find ones that feature Nintendo will take more time. We’ll share a selection of awesome Nintendo Christmas wallpapers on this page.

How do you find them?

There are several options. First, you can search by type of console. As we know, Nintendo has released a number of consoles throughout the years and some saw record-breaking sales. Each one has its own characteristics.

For example, the NES is known for its blocky graphics, which isn’t a surprise because at the time of its release, those kind of graphics were the standard. Meanwhile, consoles released later received constant improvements in this area.

One of the newest additions to the lineup, the Nintendo Switch has far more advanced graphics compared to earlier systems like the NES. Well, they are a few decades apart and graphics have evolved in leaps and bounds since, so it all makes sense.

Back to Christmas-themed wallpapers, you can look them up based on your favorite console.

Did you hear the news that the Switch just overtook the SNES as the seventh best-selling console released by Nintendo?

If you missed that one out, good thing that you hear it from us. Yes, the Switch has now become one of the most successful consoles by the company. To put it into perspective, the Nintendo Switch has sold over 52 million as of December 2019.

Meanwhile, the SNES has sold about 49 million, which means the newer hardware maintains a healthy lead over the predecessor. Besides, the Switch is not stopping, yet. Unlike the SNES that has been discontinued long ago, the Switch is still selling like hotcakes. Some sources predict that it may end up selling 20 million annually.

With this success, it won’t be difficult to find Christmas wallpapers that center around this console. If you’re curious about the best-selling Nintendo consoles, the top 3 looks like this; the Nintendo DS, Game Boy, and Wii.

They are then followed by the Game Boy Advance, Nintendo 3DS, NES, Switch, and SNES.

Nintendo wallpapers can be found everywhere thanks to the popularity of Nintendo consoles and games. But for Christmas, there are certain elements that you’ll see more, such as Christmas lights. Lights have become an integral part of Christmas celebration.

They are typically taken out of the box during the Christmas season and be put back in when it’s over. Just so you know, a lot of Nintendo Christmas wallpapers feature sparkly lights. It all makes sense considering lights are a staple of Christmas. They help bring back the joyful spirit that we’ve forgotten about in a while.

What are your preferences for Christmas lights?

Everybody has different tastes, but in most cases, they are colorful and sparkly to go along with other Christmas ornaments. These lights come in various styles, such as mini string lights, large bulb lights, net lights, etc. You’d be surprised by how diverse Christmas lights actually are.

Some of us can recognize by their looks, but have no idea about the names. Well, you can read articles about the different types of Christmas lights if you’re interested. Use them as keywords to find cool Nintendo wallpapers.

Another element you’d see on many these holiday wallpapers is a tree. It has to do with the fact that Christmas trees are also a significant symbol of Christmas.

These aren’t like regular trees, but should have a pyramid shape. There are some varieties that fall under this category, such as pine, fir, and spruce. Some people use real trees, while others prefer artificial ones.

Whatever the type, a tree doesn’t have to be presented in its true form in wallpaper. Many Nintendo wallpapers look cartoonish, which means the trees are likely drawn instead of looking like real photographs.

Is it mandatory to have a tree on wallpaper to add a hint of Christmas?

Not really, but given its importance, many creators do include it eventually. They probably wanted an instant way to evoke the Christmas spirit. Hence, besides adding decorative lights, they also chose to include a Christmas tree.

In some pics, the tree doesn’t resemble a real tree, but it’s a pyramid-shaped object consisting of items that represent Nintendo like the consoles, games, and characters. It can also look like a real tree with popular characters encircling or standing next to it.

There are many other ornaments associated with Christmas, like bells, balls, candle lights, wreaths, etc. You may come across these things a lot on Christmas wallpapers because they are that important for this joyful season. And they aren’t just dead objects. Each one has its own meaning.

The candle, for instance, is used as a symbol of pray to god. Hence, it makes a perfect addition to Christmas decorations as it helps remind us of god. Meanwhile, the cones represent unity, which are also strongly linked to Christmas celebration.

Basically, everything wrapped around the tree has a meaning, so to make a Christmas wallpaper with a tree in it is the right thing to do. Whether it’s Nintendo or another theme, a tree will always be an effective way to add that casual Christmas charm.

When it comes to Nintendo wallpapers, all the characters created throughout the history of the brand need to be featured as well.

After all, the love we have for Nintendo isn’t just for the consoles, but also for the characters that come with them. There are so many to mention, such as Mario, Luigi, Zelda, Kirby, Donkey Kong, etc.

Many of us grew up playing these characters on consoles. We’ve known them from when they were still rendered in 8-bit graphics to today in 3D graphics. Nintendo characters are a lot, so it’s impossible to squeeze them in every picture.

Those featured in wallpapers are usually the leading characters or the ones that define the games. There are many in each game besides the main protagonists.

For instance, Mario might at the front and center in his franchise, but other characters like Bowser, Toadsworth, Birdo, and Yoshi are also part of the game.

Even the villains like Goombas and Koopa Troopas are also important to the storyline despite not being the central character.