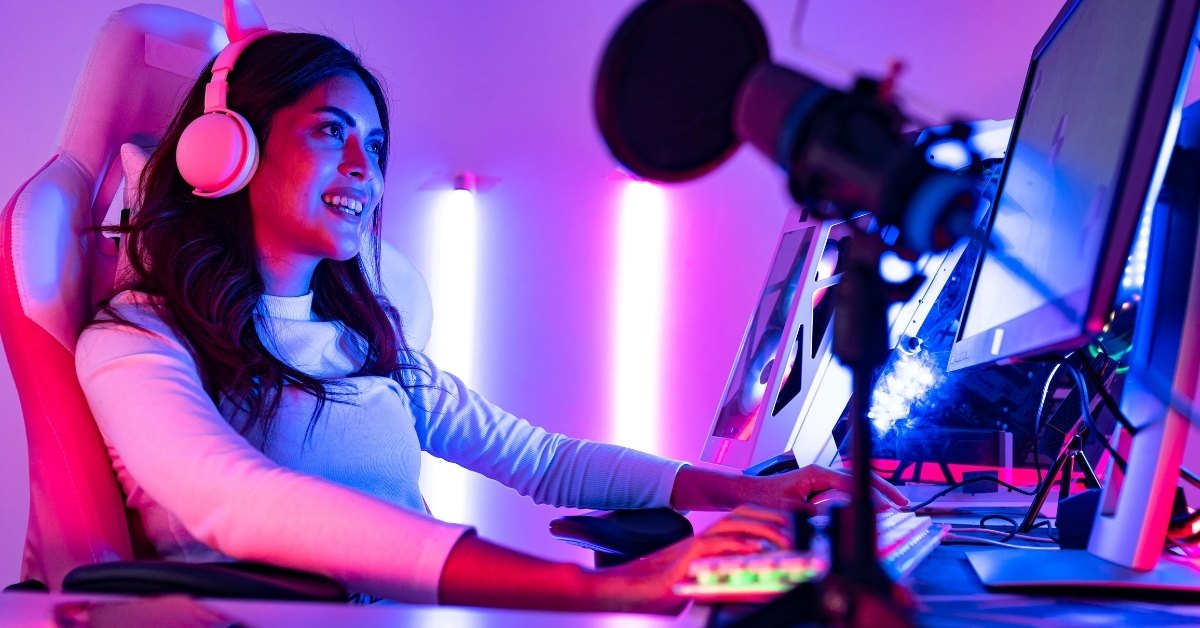 When we’re watching a female Twitch streamer host a live stream, we’re not usually interested in her age. After all, a streamer’s age has no bearing on his or her ability to entertain viewers. Age is nothing more than a number, but we can all agree that it reflects experience and wisdom.

Have you ever wondered how old a female streamer is?

You’re probably excited about this because you believe she’s your age. It could also be triggered by her youthful appearance. Streamers come from a variety of demographics. There are both young and old streamers. You’re probably wrong about a person’s age because they’ve successfully removed years from their face with a good skin care regimen.

Some people retain their youth because they have good genes, which help to slow down the aging process. Twitch, by the way, does not prohibit anyone from joining. It’s an open platform that welcomes streamers over the age of 13. While the Twitch audience is much younger, older streamers still have a chance to shine. Everyone can gain a fair share of followers if they are driven to entertain and create excellent content.

Some of the top female streamers are still young. You can tell just by looking at them. The smooth skin, no wrinkles, lack of age spots, can hint at a streamer’s age without checking out their bio. If you want to be sure, their profile is just one click away. You can discover this personal information on wiki pages. Age is not relevant when it comes to being a pro streamer.

Yes, it gives you a slight advantage since Twitch users are predominantly men who like to see pretty young faces. Just don’t think of it as a precondition for thriving on the platform. It doesn’t discriminate against older people. Those who don’t consider themselves a looker shouldn’t feel disheartened.

Some viewers couldn’t care less about looks. They just want a streamer who knows how to draw attention with their charming personality. And of course, showing off gaming skills also help. Viewers need substance while enjoying a live broadcast. It’s not just about how you chatter, but flaunting your masterful play style will make them glued to the screen.

Biggest and Famous Twitch Female Streamers (and Their Ages)

This 25-year-old prodigy was introduced to gaming at a young age because her brother was into it. She was a huge fan of The Legend of Zelda. She also spent a lot of time playing Pokémon games before she became serious about PC gaming.

As the years passed, she continued to expand her network by making social media friends with gamers. They met on Skype, which led to her meeting Twitch streamers. This prompted her to start her own channel. Her following grew to 9 million after she began streaming on the channel.

Amouranth is a popular female Twitch streamer. This 28-year-old lady was born on December 2, 1993. She rose to fame thanks to Twitch, but she is also known for her love of cosplay and content creation.

Amouranth used her social media fame to launch a YouTube channel, which now has nearly 800,000 subscribers. For the record, she enjoys performance art because it allows her to freely express her artistic vision.

Kathleen chose the alias Loserfruit for her Twitch online identity. She turned 28 in February of this year. Although her number of followers pales in comparison to Pokimane’s, it is still remarkable that she sees this figure.

Streamers would give anything to have millions of followers. She primarily enjoys playing Fortnite and League of Legends. She, like some other well-known Twitch personalities, uses Youtube by collaborating with the Click Crew channel.

This 30-year-old has made a name for herself among anime fans by seamlessly blending the two genres. Following her is a good idea for those who want the best of both worlds.

She also has serious musical talent, which is not surprising given that she completed a 2-year music degree before pursuing streaming as a full-time career. One interesting fact is that she named the pseudonym after her favorite Pokémon, Pichu. She was inspired by that and combined it with her name.

She is the same age as the other streamers on this list. Chicalive, a 27-year-old woman born in New York on May 22, 1994, is known on Twitch as Chicalive. She enjoys playing Fortnite and has won a significant amount of money. She also supplements her income with endorsement deals.

Video games had always been an important part of her childhood. When she was in high school, she had the idea to become a professional gamer. The desire grew stronger during her college years, leading her to abandon her studies and focus on her Twitch career.

Anita has had some success on Twitch at the age of 31. She has over 1.8 million followers so far. This British streamer first appeared on YouTube in 2018, and she now has around 1.5 million followers.

Her favorite games are Overwatch and Apex Legends. On a few occassions, Anita has also spoken openly about her experience with Tourette’s syndrome.

Loeya was introduced to Twitch by a high school friend. She liked the idea of the platform and decided to try it out for herself.

She has approximately 1.5 million followers to date, which is quite impressive given that she started the channel in late 2017. She began as a CSGO player before moving on to Fortnite.

Alinity demonstrates that age is not a barrier to success on Twitch. She is now 34 years old, making her one of the oldest people on this list.

Despite this, she has a sizable fan base of nearly 1.5 million followers. She is particularly fond of World of Warcraft. She plans to become an influencer in addition to streaming.

Hafu is approaching 30 and has amassed a sizable following. It’s nowhere near Pokimane’s massive fanbase, but it’s pretty good all things considered. She enjoys popular games such as Hearthstone, Among Us, and World of Warcraft.

She is also active on several social media platforms. She has over 140k Instagram followers, and her YouTube stats aren’t bad either. And she only needs a few thousand more subscribers to surpass 300,000 subscribers.

This Canadian lady celebrated her 30th birthday in February 2022. She started her Twitch channel in 2013 and has since played games such as Fortnite, Counter-Strike: Global Offensive, and Dota 2.

She has her own podcast in which she interviews famous gamers. Her father was a prominent figure who sparked her interest in video games. She also has a YouTube channel that has nearly 600,000 subscribers.

What is the minimum age for Twitch streamers?

The minimum age for Twitch streamers is 13 although it’s highly advised for people to join the platform when they reach at least 15 years of age.

Who is the youngest twitch streamer?

The title goes to Rogan Drew who goes by the name RowdyRogan. He got the chance to be a sponsored streamer when he was just 5 years old. He showed extraordinary skills In call of Duty despite being so young.

How many female streamers are there on Twitch?

There’s no information that reveals how many females have joined the website. However, recent data suggests that the demographics still skew much higher for male users, while females account for only 35% of the population.

Are there 40 year old streamers?

Many older Twitch stars are in their 30s, but you can find some who are over 40, like Dr. Disrespect and Towelliee.

As long as you have the power to command attention, there’s no such thing as old age to be a Twitch streamer. Viewers will decide which streamers they want to follow. Even if you’re no longer young, people will stick around if you keep churning out content that doesn’t bore them. Likewise, being a teenager doesn’t grant you the privilege to be successful.

How old is the oldest streamer?

The oldest streamer ever recorded is Hamako Mori who’s also referred to as gamer grandma. She was a bit late to pursue her gaming hobby. At that point, she was already 51 years old. It’s her kids and grandkids who piqued her interest in this pastime. At 92, she lives her old age happily after decades of playing eSports games.

How old is an average streamer?

Most of the streamers are between the ages of 16 and 24, but many are above this age range.